The procedure for testing the resistance was described by Huijsman (1957) and Ross & Huijsman (1969). Samples of 15-40 plants per accession are tested.

The second is a simple method and almost all screenings were conducted that way. However, some of the earlier testings were conducted in infested soil. INRA-Ploudaniel used the third method, the more reliable one. In Europe at present 5 virulence groups of G. rostochiensis and 3 of G. pallida are recognised. To obtain standardization the earlier results (from Ross & Huijsman, 1969; and Hermsen & Verdenius, 1971) had to be adapted to the scheme of Kort et al. (1977). For the more recent data, the number of plants with 0 cysts (Pa2) and 0-2 cysts (Pa3, 1981-1985) in relation to the total number of screened plants, is available too. In the root ball test only the outside of the root ball is screened on the presence of cysts, but when performed under sub-optimal growing conditions (winter season) also the inner root ball was visually examined. 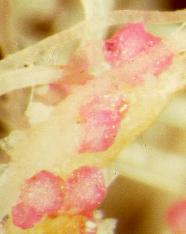 Results on Meloidogyne hapla, M. chitwoodi and M. fallax were received from CPRO and published by Janssen et al. (1996). During the investigations a new Meloidogyne species was identified deviating from M. chitwoodi, which has been described as M. fallax (Karssen, 1996).
Screening method used: 3-5 weeks after sowing about 600 nematode juveniles were supplied around the base of the seedling. After 7 weeks the roots of the plants were stained and egg masses counted. When less than 6 egg masses were found, then the test was repeated using a stem cutting of the plant. A genotype is scored as resistant when it showes less than 6 egg masses on the roots.
Since 1 May 1997 M. chitwoodi and M. fallax are quarantine organisms in the EU. To prevent spread, any planting material needs to be free of these two root-knot nematode species.

In the screening for late blight (Phytophthora infestans) resistance one hopes to find non-specific (horizontal or partial) resistance. Evaluation results have been obtained from following sources: 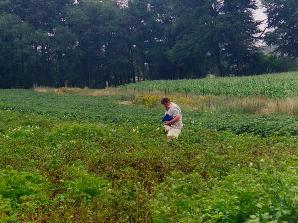 Due to a simplification of the screening method no WM-values are available from 1985 (16 plants / accession were screened twice with a time interval of a week, in a phase with representative differences in susceptibility). The figures received from CPRO in 1985 were multiplied with 0.6 , to get figures that are 'in-line' with the usual WM results. 1997 also ADPC values were calculated. The WM and ADPC values are coded as follows:

The method used was described by Hodgson (1961). The plant material used are leaves from up to 20 plants per accession, picked before flowering. Discs of 15 mm in diameter are cut from the leaves with a corkborer and 100 discs per accession are placed in moist trays. Each disc is inoculated with 1 drop of suspension containing zoospores of the pathotype 1.2.3.4.7.8.10.ll. The concentration of the suspension is 250 zoospores/0.05ml. Approximately 6 days later the percentage of the total disc surface that is sporulating is scored. This percentage is called the sporulation index (SI).
The codes for the resistance are obtained as follows:

The test, called the Glynne-Lemmerzahl method, was described by Hille (1965). It is a laboratory method in which tuber-cuttings are contaminated with the fungus. After approximately 2-3 weeks the results can be scored. From the pathotypes found in Europe the following ones are used: 1 (Dahlem D1), 2 (Giessübel G1), 6 (Olpe O1) and 8 (Kohlhaus K2). 5-10 tubers per accession were used. The results are presented as follows:

(R1 only) as PDF. Scores obtained in a specific year used tubers produced the year before. Database fields used in those days for different wart pathotypes: AXS = R1, AXT = R2, BQG = R6, CEG = R8. The PDF also shows how the results were coded for the database. In a few cases observations from more than one year were available. Then a mean value was included in the database. Intermediate scores "RS" were later transformed in the database to "M".
More info on the quarantine status in the EPPO data sheet 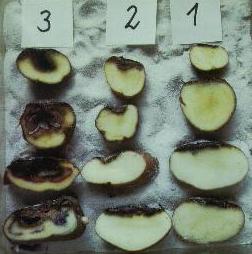 The methods used for testing potato varieties are not appropriate for the small tubers of wild species. In late spring 10-15 tubers per accession were damaged with a fine kitchen grater and inoculated by means of a paintbrush with mycel fragments and pyknospores of a mixture of 3 isolates of the fungus. After 6 weeks storage at 8.5 - 9.5°C. under moist conditions (Langton, 1971), the tubers are cut in two through the points of inoculation and classified for rottenness: hardly no expansion of fungus in the tuber, expansion in less than half of the tuber or expansion in more than half of the tuber. An infection index per accession was calculated.

The results are presented as:

Results for dry rot (Fusarium coeruleum (Lib.) Sacc) have been obtained from the Biologische Bundesanstalt (BBA), Institut für Pflanzenschutz in Ackerbau und Grünland, Braunschweig. Material was tested in 1976 and 1977. The method is described by Boyd (1952). Wounded tubers are inoculated with a spore suspension of the fungus. After 5-6 weeks the tubers are cut through the points of inoculation and an assessment for active rotting is conducted. Dry rot resistance data from the WAC inventory (Hermsen & Verdenius, 1971) have been included as well. The data are presented in 3 classes of susceptibility:

Some results on Rhizoctonia solani were obtained 1994 from a private breeding company. Material screened with isolates 3 and 8.

Data on Streptomyces scabies from the WAC inventory (Hermsen & Verdenius, 1971). They were obtained from Wiersema, who published his testing method (Wiersema, 1970).

Institute for Potato Research, Department of Genetics, Mlochow, Poland. 10-20 plants per accession were tested. Scions of each plant were grafted on tomato plants infected with PVM (isolate Uran) (Dziewonska & Ostrowska, 1978). The screening is based on the percentage of plants in which PVM was detected 6 weeks after grafting on infected tomato plants. Plants apparently not infected were retested. The results are presented as follows:

Stichting voor Plantenveredeling (SVP, later merged into CPRO, since 2000 Plant Research International), Wageningen. Material tested in 1978, 1979, 1982 - 1984. Preliminary screening for extreme resistance of samples of 50-100 seedlings, started 3 weeks after inoculation. The inoculation of the seedlings at the cotyledon stage with a spray-gun was described by Wiersema (1961). The final testing of seedlings by means of grafting on tomato stocks is not included in this test.

The results are presented as follows:

Material tested by the Stichting voor Plantenveredeling (SVP, later merged into CPRO, since 2000 Plant Research International), Wageningen in 1978, 1979, 1982 - l984. Preliminary screening for extreme resistance of samples of 50-100 seedlings, started 3 weeks after inoculation. The inoculation of the seedlings at the cotyledon stage with a spray-gun was described by Wiersema (1961). The final testing of seedlings by means of grafting on tomato stocks is not included in this test.

The results are presented as follows: 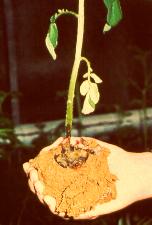 The data are coded as follows: 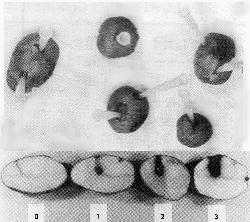 Vitamin C content of some Solanum tuberosum subsp. andigena clones, data from the WAC inventory (Hermsen & Verdenius, 1971) expressed in ppm (parts per million). The mean vitamin C content of potato varieties is about 20 mg/100 g freshly harvested tubers, and it rapidly declines to about 8-10 mg/100 g tuber in storage (CIP, 1974). The contents scored range from 3,2 to 12,8 mg/100 g tuber.

Evaluation results from Elhag (1991) on 58 genbank accessions and 11 potato varieties. From each accession 1 genotype was multiplied in vitro. The in vitro test was carried out with 0, 40, 80 and 120 mMol NaCl in the growth medium (7 replications; 6 weeks; 16 hours 4000 lux; 20-23°C). Shoot length appeared to be a good parameter to determine the salt tolerance in the in vitro test. The results from the lower salt concentration (40 mM) were not used for the classification below


Classification:
The accessions were classified as follows, using the mean value of the relative shoot lengths (as % of untreated) from the 80 and 120 mM sodium chloride treatments.


The best clones:
The relative shoot lengths (as % of untreated) of the 8 best performing accessions and the control varieties in the treatments with 80 and 120 mM NaCl are:

In an additional test the best genotypes were compared with 5 clones from CIP, three being salt tolerant (Aracy, DTO-28, CFC-69.1) and two salt susceptible (7XY-1, LT-8), according to CIP. The result (dissertation Elhag 1991, p.108) are summarized below as % of untreated:

The Federal Biological Research Centre for Agriculture and Forestry (BBA; since 2008 part of JKI) in Braunschweig contributed substantially to the evaluation of the Dutch-German Potato Collection. In a special publication on the occasion of 100 years BBA, the history of late blight, history of potato wart in Germany